The Scintillon Institute is proud to announce the recent addition to its faculty a leading scientist Dr. Yun Yung, who is an expert on cortical brain development and related neurological disorders, including hydrocephalus.

Hydrocephalus, otherwise known as “water on the brain” is one of the most common neurological disorders in children with an incidence rate of 0.01%, similar to Down’s syndrome.  In addition, adults and the elderly can also suffer from different variants of hydrocephalus, particularly in cases such as dementia and Alzheimer’s disease. 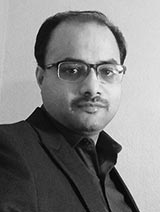 Dr. Ambasudhan is a stem cell biologist working in the field of neurological diseases, including Parkinson’s, Alzheimer’s, Autism Spectrum Disorders and Stroke. His lab has established patient specific disease-in-a-dish models of these diseases using novel cell-reprogramming technologies, and has been using them a) to understand disease mechanisms, and b) for developing effective therapies.

Prior to joining Scintillon he was a neuroscience and stem cell research faculty at the Sanford-Burnham Medical Research Institute. He received his post-doctoral training in stem cell biology and drug discovery at the Scripps Research Institute and training in functional genomics relating to neurodegenerative conditions from the University of Michigan, Ann Arbor. 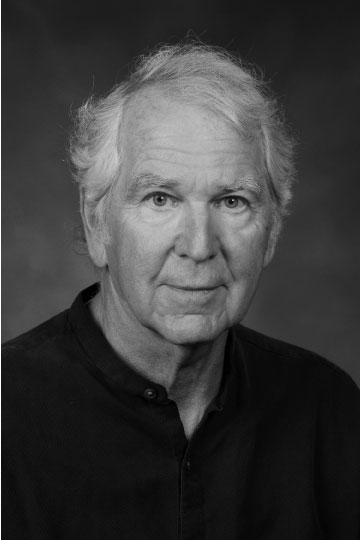 Prior to joining Scintillon, Dr. Joel N. Buxbaum was Professor of Medicine at NYU School of Medicine and Professor of Molecular Medicine at The Scripps Research Institute where he was head of arthritis research and the W.M. Keck autoimmune disease center.  In recognition of his research contributions he was elected to the American Society for Clinical Investigation and the Association of American Physicians and received the Dart Biotechnology Award from NYU Medical School in 2013. He has served on many study sections and review groups including the Advisory council of the National Genome Research Institute of the NIH and chaired the council on clinical and research investigations of the American Cancer Society.  He is currently a member of the editorial boards of Amyloid and the FASEB journal and has served as a consultant to companies developing therapies for the systemic amyloidoses.

His major research interests focus on the genetics, pathogenesis and treatment of human protein misfolding diseases, many of which are age related, and include those that involve the central nervous system, such as Alzheimer’s and Parkinson’s diseases, and those with predominant systemic manifestations best exemplified by immunoglobulin L-chain and transthyretin amyloidosis, both of which affect the kidneys, heart and peripheral nervous systems.  His most recent work has examined the structural and functional relationships among amyloidogenic proteins and their possible roles in normal physiology including effects on the formation of microbial biofilms which are responsible for the persistence of infection on the surfaces of implanted prosthetic devices. 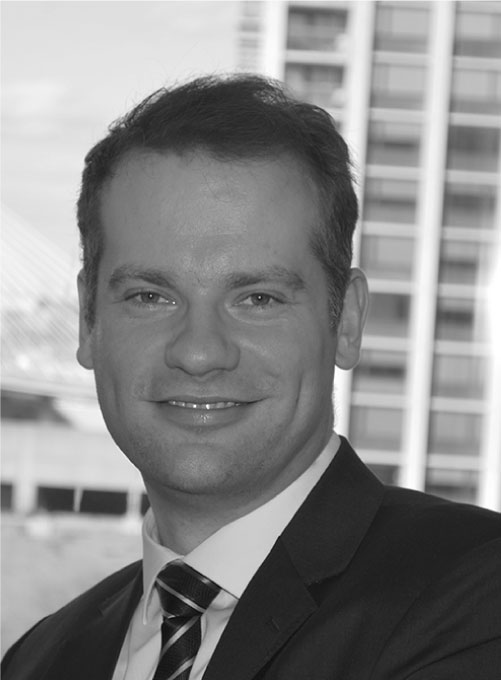 Dr. Cracan joined the Scintillon Institute faculty as an Assistant Professor in December 2018. The long-term goal of his lab is to apply quantitative metabolomics, structural enzymology and protein engineering methods to study cellular metabolism and bioenergetics in normal physiology and disease. Specifically, his research program seeks to illuminate how cellular metabolism is contributing to cancer and aging-associated neurodegenerative diseases.

Dr. Cracan received his undergraduate degree in Biology and Biochemistry from the Moldova State University in the Republic of Moldova in 2005 and his Ph.D. in Biological Chemistry from University of Michigan in 2012, where he studied the intracellular pathway for trafficking of cobalamin (vitamin B12) in the laboratory of Ruma Banerjee. In 2012, he joined the laboratory of Vamsi Mootha at the Massachusetts General Hospital and Harvard Medical School. There, he obtained extensive experience in mitochondrial biology by applying his experience in enzymology and biochemistry to find ways to alleviate consequences of lesions in the electron transport chain and developed tools to study redox metabolism. Dr. Cracan is a recipient of NIH Pathway to the Independence award from NIGMS.

Dr Digicaylioglu is a neurosurgeon and a neuroscientist. He was trained as a research fellow at Harvard University, Brigham and Women’s hospital by Dr. Stuart Lipton.  His research focuses on neurodegenerative diseases, with a specific focus on ischemic stroke, traumatic brain injury and brain tumors. Furthermore, his work on the neuronal function of Erythropoietin encouraged many of his colleagues to work on this cytokine. In addition, supported by an NIH grant, he is currently evaluating the inductors of HIV associated dementia and the role of oxidative and nitrosative stress in this type of neurodegeneration.  As an educator, Dr. Digicaylioglu successfully trained neurosurgery residents, graduate students, undergraduate students and senior high school student.

Prior to joining the Scintillon Institute, Dr. Digicaylioglu was an Associate Professor of Neurosurgery and Physiology, Research Director, Member of the Residency Education Group at the University of Texas, Health Science Center in San Antonio, Department of Neurosurgery and South Texas Research Facility.  Dr. Digicaylioglu has also a co-appointment at The Scripps Research Institute. Furthermore, he is the founder of Peria Inc, a biotechnology company focused on developing novel diagnostic tools for point of care and over the counter. 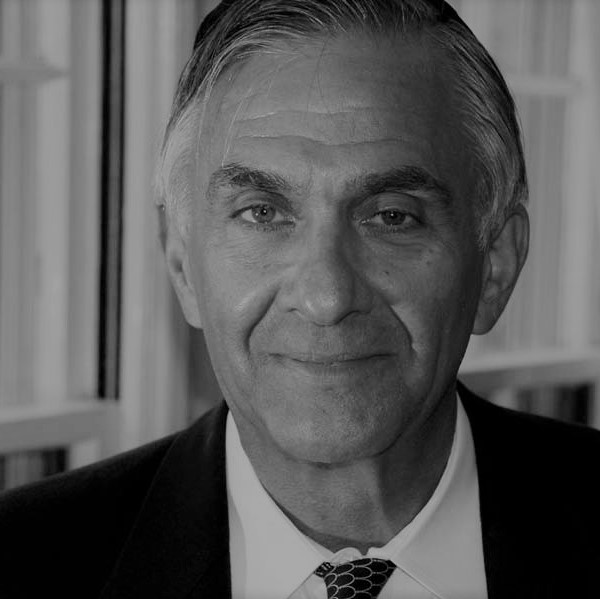 Dr. Fred H. Hochberg is a Neurologist and Neuro-Oncologist with a major focus on the translation of laboratory findings into therapies for patients with brain tumors. His research demonstrated that methotrexate therapy increased the survival of brain lymphoma patients from 11 months to four years. As a result, this treatment is now the gold standard upon which single or multi-drug therapies are based. In addition, the doctor serves on NCI and other national brain tumor committees and teaches nationally and internationally in his field. His current work involve the creation of “liquid biopsies” utilizing extracellular vesicles for minimally invasive diagnosis of neurologic disease. 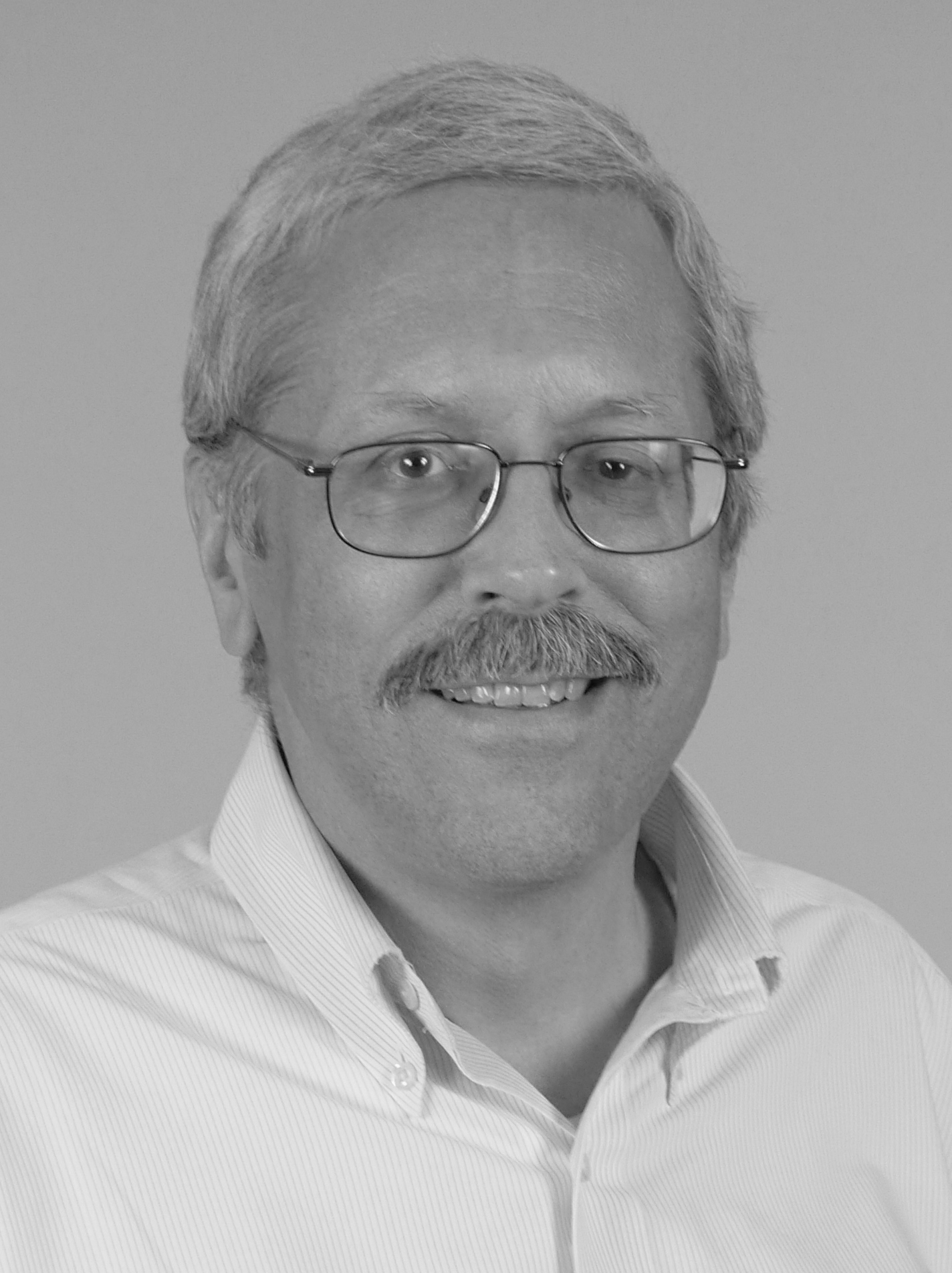 Prior to joining Scintillon he was a Senior Scientist at the Sanford-Burnham Medical Research Institute, an assistant researcher and lecturer in the Department of Electrical and Computer Engineering at the University of California San Diego, and a research engineer at the Westinghouse Electric Corporation Advanced Technology Laboratories. 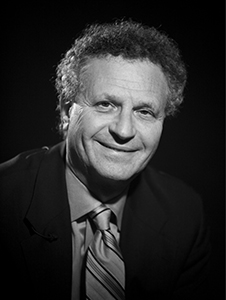 Neurologist and neuroscientist Stuart Lipton, MD PhD, is a renowned expert in dementia, running a large basic-science laboratory, and an active clinical neurology practice at the University of California, San Diego. He is best known for discovering the mechanism of action and contributing to the clinical development of the latest FDA-approved treatment for Alzheimer’s disease (memantine/Namenda®, an uncompetitive antagonist at the NMDA receptor). Lipton and collaborator Jonathan Stamler discovered the chemical reaction termed S-nitrosylation as a ubiquitous redox-regulator of protein function and have recently combined memantine with S-nitrosylation technology to produce a new drug, NitroMemantine, that displays disease-modifying activity in animal models of Alzheimer’s disease. Lipton’s group also discovered the GluN3 family of modulatory NMDA receptor subunits, characterized the molecular pathways for protecting neurons with erythropoietin, and discovered the transcription factor MEF2C. Recently, his group showed MEF2C serves as a master switch for neurogenesis from human neural stem cells and is regulated by S-nitrosylation. They found that dysregulated MEF2C is involved in the pathogenesis of autism spectrum disorders, vascular dementia, Parkinson’s disease, and Alzheimer’s disease. Lipton is a recipient of the Ernst Jung Prize in Medicine, is an elected a fellow of the AAAS Neuroscience section, and a recent awardee of the Alzheimer’s Disease Association.

Educated at three Ivy League universities (Cornell, University of Pennsylvania, Harvard), Dr. Lipton completed scientific training as a postdoctoral fellow with Torsten Wiesel when Wiesel won the Nobel Prize. Dr. Lipton then spent 25 years on the faculty at Harvard before moving to La Jolla 15 years ago as founding director of a new neuroscience center. 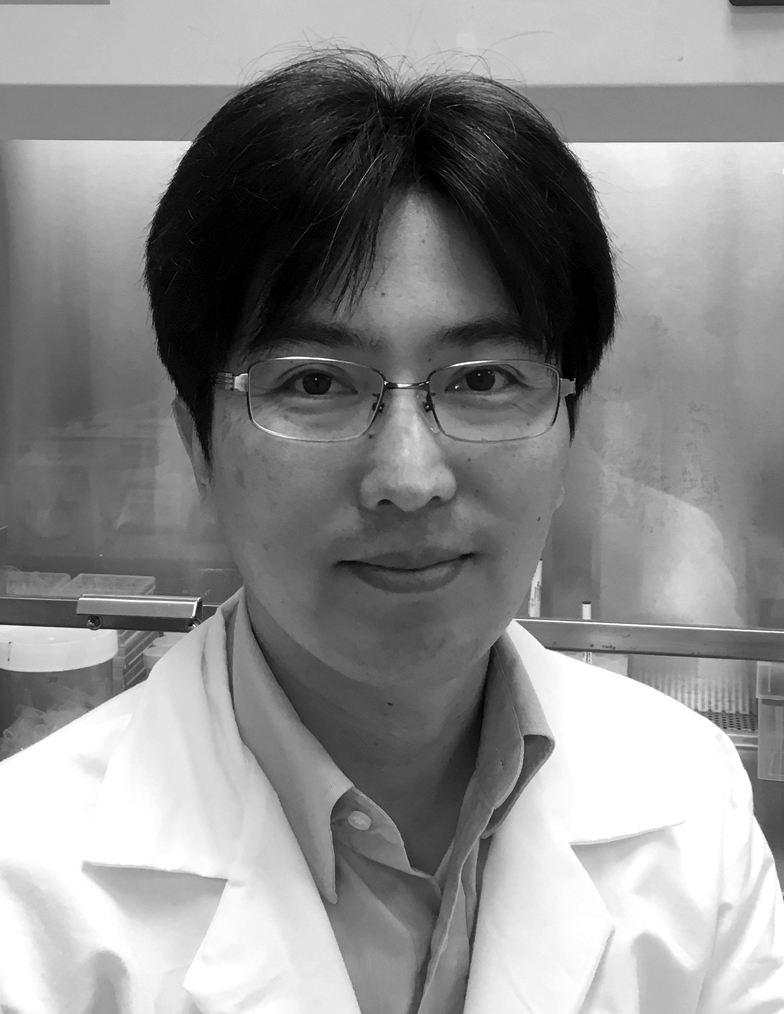 Dr. Nakamura’s research is focused on redox biology with specific expertise in the area of nitric oxide (NO) signaling in the nervous system. The group is extensively studying an NO-mediated posttranslational modification called S-nitrosylation and its pathophysiological roles under neurodegenerative conditions such as Alzheimer’s and Parkinson’s diseases.

He obtained his PhD from University of Tsukuba, Japan in the research field of oxidative stress. Prior to joining the Scintillon Institute, he was a research assistant professor at Sanford-Burnham-Prebys Medical Discovery Institute. 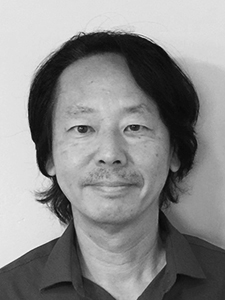 Dr. Nakanishi’s current research is focused on (1) the regulation of NMDA-type glutamate receptors and their roles in neurodegenerative diseases, such as Alzheimer’s Disease and stroke (2) the transcription factor MEF2 and its roles in autism spectrum disorders.

Prior to joining Scintillon, he was an Assistant Professor at Harvard Medical School, and an Associate Professor at the Sanford-Burnham-Prebys Medical Discovery Institute. 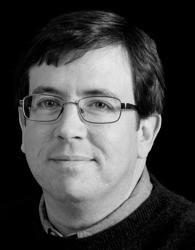 The Nolan lab develops new tools for quantitative cell and molecular analysis and applying these to important biomedical problems. We apply these new tools to a range of biomedical problems, including analysis of host-pathogen interactions and the immune response, cancer susceptibility, diagnosis, and treatment, and thrombosis and hemostasis.

Prior to joining the Scintillon Institute, Dr. Nolan was a Professor at the La Jolla Bioengineering Institute and Director of the National Flow Cytometry Resource at Los Alamos National Laboratory. 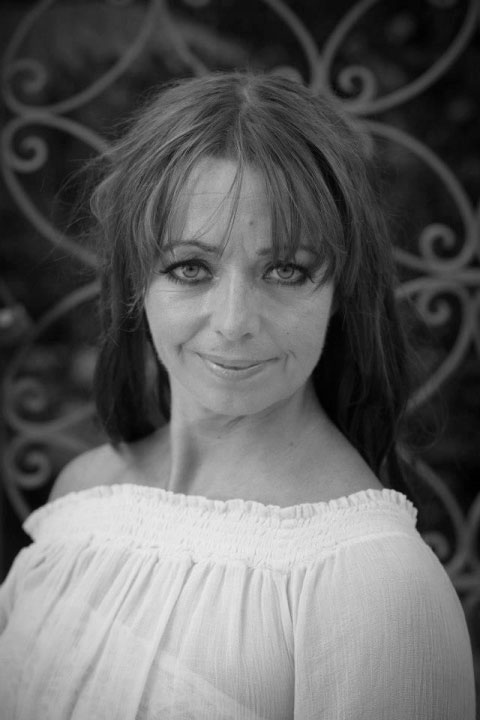 The research interest of the Pedersen laboratory is based on the recent discovery of microRNAs (miRs), which has revolutionized our understanding of gene control. miRs play key roles in controlling development, stem cell fates and differentiation, and mutations in human miR genes have been linked to human disease.

The main focus of the Pedersen laboratory is to investigate the role of specific miRs in normal cells and explore how to use RNA molecules (miRs and mRNAs) as tools to regulate/counteract potential dysregulation in neurological disorders and cancer. A second area of research interest of the lab is to evaluate miRs function as novel restriction factors of mobile elements and retrovirus (LINE-1, hERVs and HIV-1) in human cells.

Dr. Pedersen received her BS and MS in Molecular Biology from the University of Copenhagen in Denmark in 1999 and 2000, her Ph.D. in 2002 working in Dr. John C Reed’s lab, at the Burnham Institute in La Jolla on apoptosis resistance and her post-doctoral studies in Dr. Michael David’s lab at UCSD in La Jolla focused on cytokine regulated miRs. Dr. Pedersen started her own lab at UCI in Irvine in 2011 continuing her work on miRs roles in stem cell reprogramming, neurological disorders (stroke, Alzheimer’s disease) tumorigenesis and viral disease. Dr. Pedersen was the recipient of an NIH Pathway to the Independence award (K01) from NCI and currently holds an R01 from NINDS. Dr. Pedersen joined the Scintillon Institute faculty as a tenured Associate Professor in September 2019. 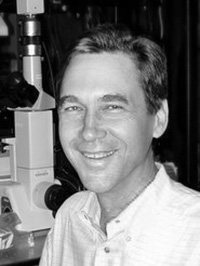 Prior to joining the Scintillon team, Dr. Price was an Associate Professor at Sanford-Burnham Medical Research Institute, where he was a member of the Signal Transduction and Stem Cells and Regeneration Research Programs. He also co-founded Vala Sciences Inc, which develops and markets software and kits for cell-image based assays. 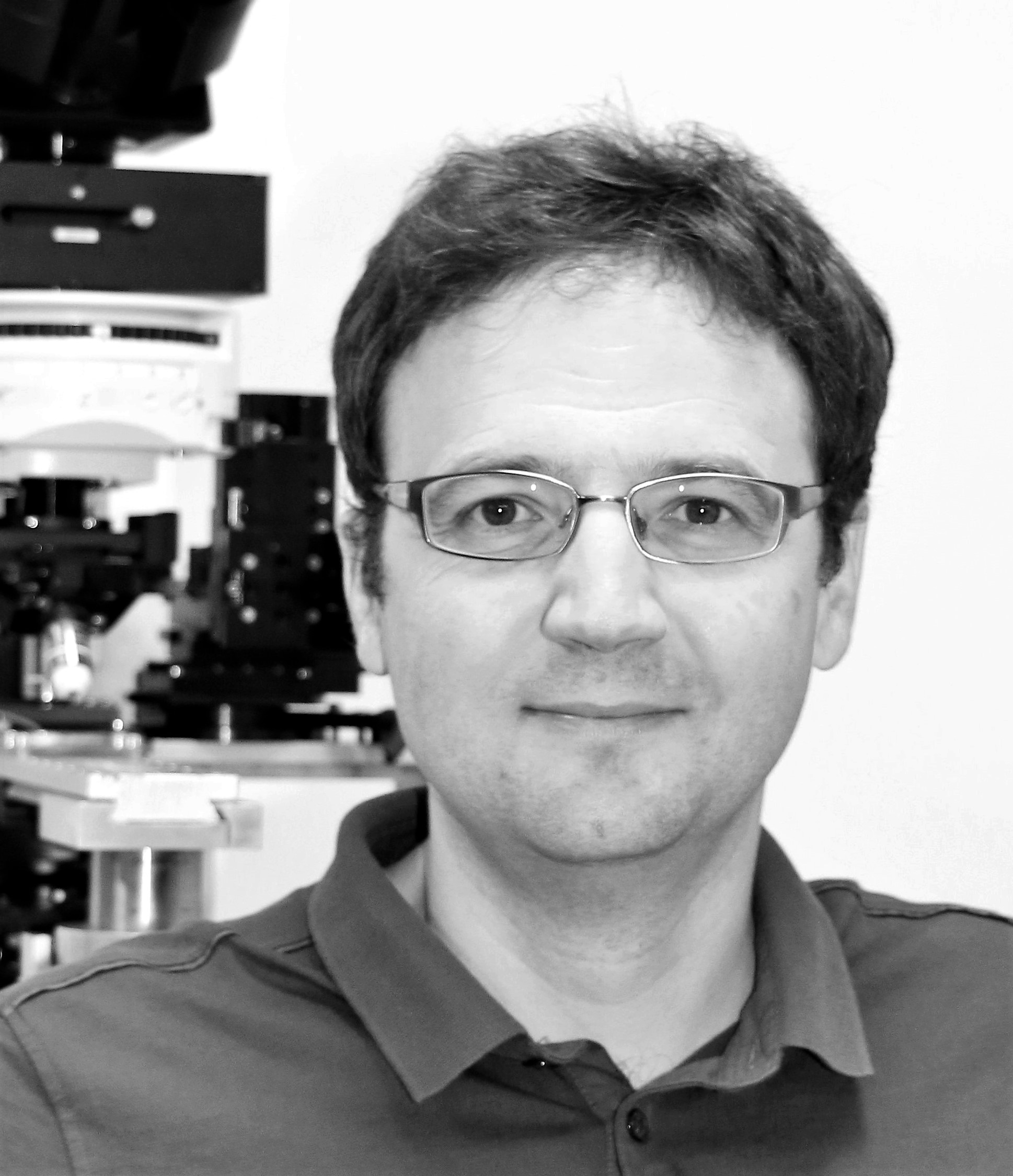 Prior to joining the Scintillon team, Dr. Tabarean was an Assistant Professor at The Scripps Research Institute in the Department of Molecular and Cellular Neuroscience. 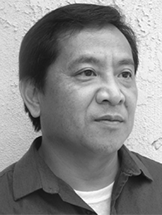 Dr. Wang is the Scientific Director and founder of the Scintillon Institute. His research focuses on pre-mRNA splicing, one of the most important molecular biology mechanisms related to many diseases, including cancer.

Dr. Wang is an inventor of more than 10 patents in the fields of RNA interference, imaging, diagnostics, skin protection, and human stem cell production. He is also the founder of Allele Biotechnology & Pharmaceuticals, Inc.,  a research-based company specializing in the fields of RNAi, stem cells, viral expression, camelid antibodies, and fluorescent sensors. 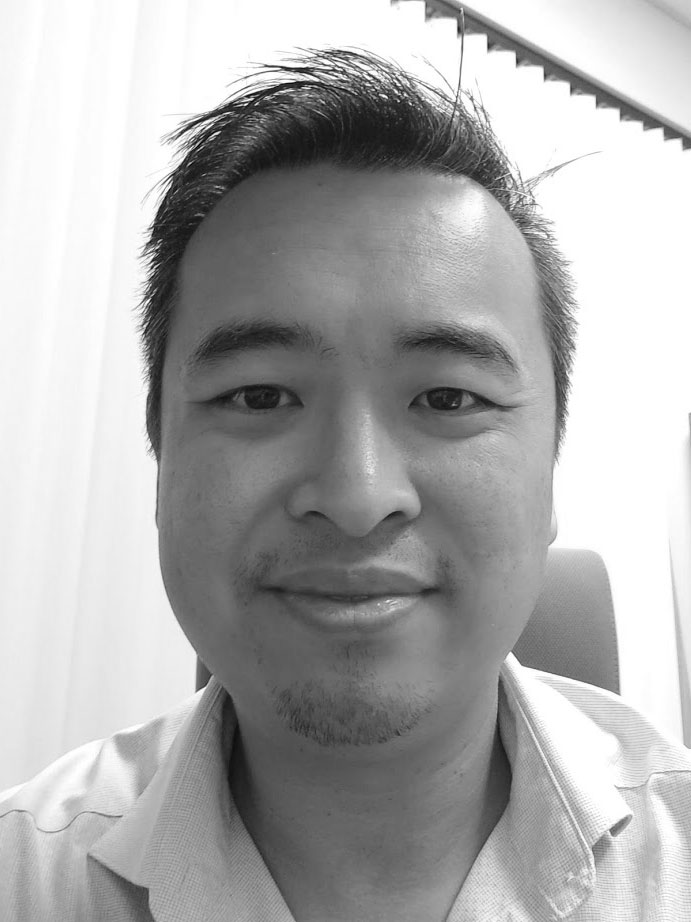 Yun C. Yung, Ph.D. is a neurobiologist and an assistant professor.  Dr. Yung’s research focuses on understanding neural stem cell fate in cortical development.  In addition, he studies bioactive lipids in the context of brain development and understanding and developing therapies for bleeding-related neurological disorders, such as post-hemorrhagic hydrocephalus in infants and children.

Prior to joining Scintillon, Dr. Yung was a research assistant professor at Sanford Burnham Prebys Medical Discovery Institute and trained at The Scripps Research Institute with Dr. Jerold Chun in lipid biology and transcriptomic and genomic variation in neurons.  He is the recipient of several awards, including a graduate research fellowship from the National Science Foundation, a post-doctoral Hydrocephalus Association Mentored Young Investigator Award, and a Hydrocephalus Association Discovery Science Award.