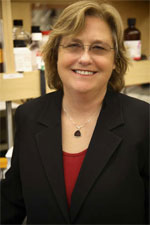 "The potential of pluripotent stem cells: from cell therapy to rescue of endangered species"

Dr. Jeanne F. Loring is a Professor and the founding Director of the Center for Regenerative Medicine at The Scripps Research Institute in La Jolla. She is also an Adjunct Professor at the Sanford-Burnham-Prebys Medical Discovery Institute and the San Diego State University. Her laboratory studies human pluripotent stem cells (hPSCs), the remarkable cells that can make every cell type in the body. Her lab is developing a patient-specific cell replacement therapy for Parkinson’s disease and a stem cell-based treatment for multiple sclerosis, and they are studying the underlying causes of autism. With the San Diego Zoo, her lab is developing a "zoo" of induced pluripotent stem cells from endangered species to aid in their conservation.

Dr. Loring started her career as a faculty at the University of California Davis. She then moved to industry and held several senior management positions, including serving as a Senior Director at Incyte Genomics; and CSO & Founder of Arcos Biosciences (which was acquired by CyThera Inc., which in turn later merged with ViaCyte Inc.- a leading company that develops human pluripotent stem cells (hPSCs) based beta-cell replacement therapy for diabetes). She returned to academia in 2004 as the Co-Director of Stem Cell Center at the Sanford-Burnham-Prebys Medical Discovery Institute. She now serves on many scientific and bioethics advisory boards and is frequently quoted in major newspapers, appears on television and in documentary features, and gives many public lectures about science and society. She is particularly concerned with the dangers of unregulated stem cell treatments in the US and other countries (“stem cell tourism”).

We are so thrilled to host Dr. Loring.  Please join us!